Not all WHO cannabis recommendations would loosen international control, UN drug agency says

Not all WHO cannabis recommendations would loosen international control, UN drug agency says 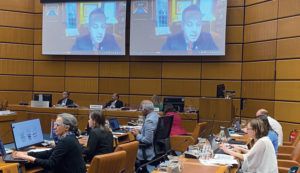 An analysis by a United Nations monitoring body concludes that most of the World Health Organization’s (WHO) cannabis scheduling recommendations would either have little impact on international drug controls or actually tighten requirements.

The analysis, conducted by Vienna-based International Narcotics Control Board (INCB), was provided to member states shortly before the start of the first in a series of UN meetings. A copy of was obtained by Marijuana Business Daily.

The WHO recommendations are often celebrated as a positive step toward the easing of the international control of cannabis, which would be a positive development for the industry.

Particularly one recommendation would be a big symbolic win because it would implicitly acknowledge the medical value of cannabis at the highest international level.

But regarding practical implications in the level of international control, the INCB document found that, if adopted:

The board did not position itself in favor or against any of the WHO’s recommendations.

The INCB is currently participating the Commission on Narcotic Drugs (CND) meetings aimed at preparing member states of the commission for a December vote.

The first meeting started June 24 in a virtual format.

In the document, the INCB wrote that adopting some of the recommendations “would standardize the control requirements applicable, making it easier for competent national authorities to monitor and report the information to INCB.”

The board emphasized the importance of more accurate definitions when it comes to certain recommendations – particularly 5.6 – “to ensure a shared understanding among Member States.”

The INCB noted that increased control measures could be a burden for some nations if Recommendations 5.2 and 5.3 are adopted.

Technical challenges could hinder the implementation of Recommendations 5.5 and 5.6, which would require member states “to identify and control the precise composition of the preparations,” according to the board.

If Recommendation 5.5 – which is focused on CBD – is adopted, national legislation would be required “to differentiate cultivation for the extraction of CBD and or delta-9-THC and for industrial purposes as described in the 1961 Convention.”

The INCB considers only fiber and seed to be “industrial purposes.”

The board noted the current inconsistency that some countries don’t report the cultivation of cannabis plants with low THC and the manufacture of CBD products because CBD isn’t explicitly scheduled.

Cannabis is currently included in Schedule I and Schedule IV of the 1961 treaty.

The WHO recommended its deletion from Schedule IV, keeping it in Schedule I.

However, the INCB found that if the recommendation is adopted, “control measures at the international level will not change.”

Neither would the periodic “reporting requirements” with which member states must comply.

THC was not well-known when the 1961 convention was drafted but was included in the 1971 Convention on Psychotropic Substances.

The WHO recommended transferring THC from the 1971 treaty to Schedule I of the 1961 treaty. The rationale behind the recommendation is to simplify the reporting expected from member states and streamline international control.

According to the INCB, these recommendations “would result in a number of additional control measures.”

The WHO recommended deleting the category of “extracts and tinctures of cannabis” from Schedule I of the 1961 treaty.

The reason: “Extracts and tinctures” don’t need to be listed, as these products are also considered “preparations” and so are subject to control.

“The presence of extracts and tinctures of cannabis in Schedule I could be considered a repetition that Recommendation 5.4 is aiming to correct,” the INCB noted.

In other words, it appears the INCB position is that adoption of this recommendation would not have a meaningful practical implication in terms of control.

If this recommendation is adopted, a footnote would be added to the cannabis entry in Schedule I of the 1961 treaty to clarify that preparations containing predominantly CBD and up to 0.2% THC are not under international control.

The rationale for this WHO recommendation: CBD is not liable to the same level of abuse of substances included in the treaties.

The INCB found that while “CBD is not specifically listed” in the international drug control treaties, CBD “that is produced from an extract of cannabis is included in the 1961 Convention.”

“The main issue to consider relates to its practical implementation at the national level” because, “in most countries, chemical analysis down to the threshold indicated in the recommendation may not be possible,” the INCB said of the recommendation’s potential impact.

The agency identified “lack of access to appropriate identification techniques” for the required level of accuracy. And even where feasible, the INCB mentions it might not be “considered to be a good use of resources.”

The INCB also raised concerns over “cannabis cultivated for the extraction of CBD.”

The reason: The board considers CBD “would need to be monitored under the provisions of the 1961 Convention because it does not meet the definition of ‘industrial purposes’.”

INCB President Cornelis P. de Joncheere has clarified in previous meetings that “if the cultivation of cannabis … is for the production of the flowering top, then it should be considered under control regardless of the THC or CBD content.”

Some countries, such as France and the United Kingdom, follow this restrictive interpretation, not allowing hemp growers to use the flower to extract CBD.

If this recommendation is adopted, certain pharmaceutical preparations with THC and a low risk of abuse and dependence would be included in Schedule III of the 1961 treaty. This would be a lower level of control than Schedule I.

The INCB said “it is not clear to which kind of preparations the recommendation would apply,” suggesting more accurate definitions are need.

If the CND adopts this recommendation, the INCB said it “would eliminate the need for some measures of control, such as those applicable to the international trade of these preparations.”

Guide to Cleaning Your Cannabis Gear