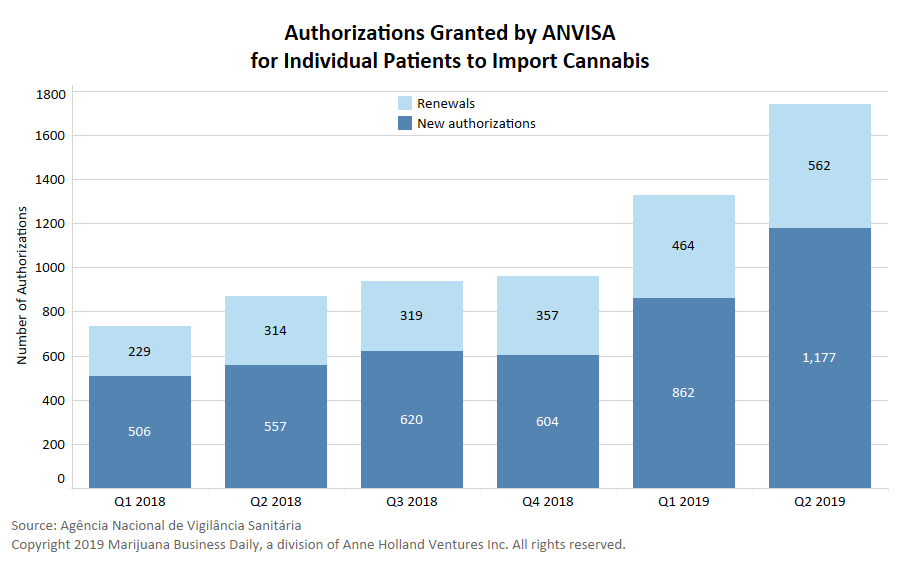 The number of total authorizations granted to individual Brazilian patients to import medical cannabis since the program launched in 2014 surpassed 10,000 at the end of June 2019, according to data that the country’s health-care regulator shared directly with Marijuana Business Daily.

Upon obtaining an authorization, Brazilian patients can import a maximum quantity of medical cannabis on a case-by-case basis for a period of up to one year. Authorizations can be renewed, however.

The maximum number of active authorizations at the end of June was 4,965, according to MJBizDaily calculations based on data from the Agência Nacional de Vigilância Sanitária, aka National Sanitary Surveillance Agency (ANVISA).

Of the almost 5,000 “active” patients, only those who still haven’t used the maximum authorized amount could continue importing until the end of their 12-month authorization.

In most cases, only CBD oils are imported because the Federal Council of Medicine (Conselho Federal de Medicina) – the agency responsible for regulating the medical profession – restricted the prescription of cannabis to only CBD, and it can be used only to treat refractory epilepsy in children and adolescents.

After taking feedback about the proposals through Aug. 19, ANVISA on Tuesday announced it received a total of 1,554 comments.

A final decision is expected by the end of October.

About two-thirds of the contributions considered that ANVISA’s proposals would have a positive impact. More than 60% of the participants identified themselves as “citizens or consumers,” the agency said in its announcement.

Earlier this month, Brazilian President Jair Bolsonaro was asked about the agency’s move.

According to Brazilian newspaper O Globo, Bolsonaro said he shares Osmar Terra’s position. Terra, the country’s minister of citizenship, has been the government’s most vocal, high-level authority against ANVISA’s plans.

Bolsonaro also said he’d be willing to have a conversation about ANVISA’s proposals with the agency’s president, William Dib.

However, Bolsonaro emphasized he has “zero influence” over the regulatory agency, which he said has “superpowers.”

In an interview with Folha de S.Paulo, the Brazilian president said he wasn’t elected “to legalize drugs,” possibly a reference to ANVISA’s proposals.

The Brazilian government doesn’t seem to have a unified position on the issue of medical cannabis.

Earlier this month, for example, Gen. Eduardo Villas Bôas, a former army commander and current adviser to the Institutional Security Office, defended the use of medical cannabis. He also said the challenges that those in need of medical cannabis face is “social hypocrisy.”